Firestorm 4.6.1 is available for download! I have been using the 64bit version for over a week with no problems.

There is a warning about the download: “New untested download server! Results may vary! We are using a new server for our downloads and we do not know how well it will perform. Please be patient if your download is slow and know that we are monitoring things.” I strongly recommend checking the sumcheck to be sure it did not get corrupted in the download process. Also be patient and perhaps download in a few days and/or in the wee hours of the morning.

As always, do a clean install!

“I love it when a plan comes together!” Hannibal; The A-Team

Filed under Veiwers and tech stuff

My Window on the World

A while back I suggested a topic for Strawberry Singh’s weekly meme at her blog. With many of us using third party viewers and with all of the different adjustment possible, especially with Firestorm, it should be interesting to share how we see the world, how we arrange our viewers. Strawberry posted the suggestion at her blog. 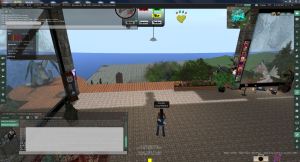 I captured this with the Windows snipping tool.

“Any sufficiently advanced technology is indistinguishable from magic.”

As Inara points out, and Jessica makes clear, there are rules. If you can’t abide by them please wait a few days for the official release!

Inara Pey: Living in a Modemworld

The Firestorm team have announced the re-opening of their Second Life release preview group, for those who are interested in assisting the team with identifying potential issues / bugs with new releases of the Firestorm viewer.

“The perfect understanding of an event after it has happened, often when you realize too late what you could have done to avoid it.” We had one of those moments shortly after our last Firestorm release when we discovered that quite a few users were experiencing a bug that made their screens pink. This bug had slipped past our Quality Assurance team and went out in the official release. The hindsight is that we could have offered a pre-release to a larger number of users than what we have in our beta group. Chances are they would have discovered the bug, we would…

This is something new and profound, there will be a meeting / discussion / interview with Jessica Lyon and Oz Linden at Wednesday, March 7th at 3pm SLT. The meeting will be broadcast live over Treet.tv and questions will be accepted from the audience! To my knowledge nothing like this has happened before. Hopefully it is the first of many such attempts at interactive communication between the community and Linden Lab.

The full announcement from the Phoenix Viewer blog is copied below:

This Wednesday, March 7th at 3pm SLT. I, Jessica Lyon will be interviewing Oz Linden from Linden Lab about the third party viewer policy additions and related concerns. I will be representing the Third Party Viewer Community and the resident community during this interview, not specifically this project. This is not a Phoenix Office Hour and is very likely a one time thing.

The interview will take place in a private region that will not be open to the public, however you will all be able to participate and watch on the live stream here. http://treet.tv/live.Ask your questions on the live stream and they will be forwarded to me, then I will ask them for you to Oz during the second half of the show.

This is a very rare and in many ways historic event that will hopefully answer all your questions and concerns in regards to the new policy changes. The policy affects you! so be informed! Mark your calendars, invite your friends and spread the word.

Who: Jessica Lyon and Oz Linden
What: Interview with Oz linden for clarifications on the new policy additions and how they effect you and the Third Party Viewers you use.
When: Wednesday, March 7th, 3pm SLT
Where: http://treet.tv/live
Why: Because it’s important!

Hope to see you on the stream!

A Surprising Leap-Week in Second Life

You may not have noticed it, but there has been some pretty amazing stuff going on in and around Second Life this week.

Last Thursday there were new rules for Third Party Viewers announced. That had the blogs churning over the weekend. Surprisingly the articles themselves and the comments to them were mostly constructive, trying to understand what it all meant. I saw very few flame-out rants or end-of-the-world-as-we-know-it predictions.

By Monday afternoon Oz Linden was answering questions, in detail and officially!! He was even agreeing with some of the objections and promising to make things whole again when possible. He even delayed action on part of it so they could find a better solution! Just as importantly he explained why the policies were changed! There is no need of me going into detail here, but suffice it to say there were legitimate problems to be resolved. The methods may have been heavy handed, but much of the vital functions that were lost can be recovered by doing things a different way, either in world or by LL in server code.

The “shared experience” part of the new rules can be hard to understand. It is very vague as written. Two important points: 1- LL is primarily concerned with TPV features that break on the official viewer. Features that do not work on other viewers (even LL features) are a concern of the effected viewers development team and users. 2- Oz suggested that Test Viewers, even on the main grid, would be okay; so long as the default download met the TPV requirements. This is a huge relief! TPVs have been the testbeds for several ideas that LL would never have approved in advance (avatar physics among them).

The whole air of communication and cooperation around this change has been something new in Second Life. I give a lot of credit to Oz for his efforts.

Then —— Rodvik announces a decision on last names. Basically – NO.

The new thing is that he explains why – at length. Personally I do not agree, but at least I know why the decision is as it is (for now, he dangled a carrot at the very end of his post).

If all this communication and cooperation keeps up we may get Second Life back on track!

“Without continual growth and progress, such words as improvement, achievement, and success have no meaning.” Benjamin Franklin

Linden Lab is a corporation; a private corporation with investors backing it. We must always remember that. Their first priority is, and must always be, giving the investors a return on their money. Of course in order to do that they must, to borrow a phrase from Simon & Garfunkel “keep the customer satisfied”. Note I said satisfied, not happy, just satisfied enough so we stay around and spend our money.

There have been some interesting twists in the customer/resident – corporate dynamic since I first came to Second Life. In January of 2007 the viewer went open source and development began on Third Party viewers. This development changed the dynamic because the new viewers were more responsive to resident wants and needs. They were not at all beholden to the investors. When this worked well the feedback between Linden Lab and the Third Party Viewer developers gave us innovations LL had never even thought of (think body physics) or had not thought important enough to invest development time into (double-click teleport). When it went badly — well, Emerald was an embarrassment to both LL and the third party community.

The latest evolution of the resident relationship with Linden Lab is crowd sourcing of projects. The one-man-developed Kirsten’s Viewer is in the process of funding it’s developer in the face of a RL economic situation that would halt his work without it. The residents have also reached their US$5400 goal (in under 3 weeks) to hire Karl Stiefvater (who used to be Quarl Linden) to code a mesh deformer so mesh clothing fits properly (any additional funding will be used to improve the project beyond a single layer). If these initiatives are well accepted by Linden Lab and by the Third Party Developers a whole new avenue for resident involvement will be open. Even if you can not code beyond “Hello Avatar” you can vote with your wallet to develop the features you consider valuable.

All of that said I reiterate my initial thought: Nothing will be adopted that impedes the investor’s return on the money they have put into Linden Labs.

Made with love since 2012 in Second Life

EVE & ADAM Mesh Body & All my Creations For second life

The diary of a West Coast transplant to the Bay of Fundy.

A Kat and A Mouse

My observations about and within Second Life